Our teacher is Miss Mann.

Our teaching assistant is Mrs Benger.

If your child has their own special book at home that they enjoy reading, they are definitely encouraged to bring it into school to share with the other children.

Each child will also bring home key words. These key words will be put in their diary for the children to practice at home when reading.

Foundation 2 will be having PE on a Monday afternoon. Each child will need to have a named PE kit which includes a white t-shirt, blue or black shorts and trainers/black plimsols. As it begins to get colder feel free to pack blue or black jogging bottoms too.

Foundation 2 will be doing Forest School every Friday morning.

If your child could bring in a pair of wellies to wear during their Forest School, that would be greatly helpful. Any questions, or concerns please come and see us.

Fun websites to help with your learning

What are we learning about this term?

This week in Foundation the children have really enjoyed learning all about recycling. They've been reading a story called 'Sharing a shell', which follows the story of a snail who doesn't have a shell to hide in, until he finds an empty one, but on his travels he sees lots of rubbish and it is really sad. The children have explored why recycling is important, where paper comes from and what happens if we don't recycle.

At the end of this week we have celebrated kindness day. The children explored what kindness means, and showed their ideas through drawings and labels on the playground using chalk! 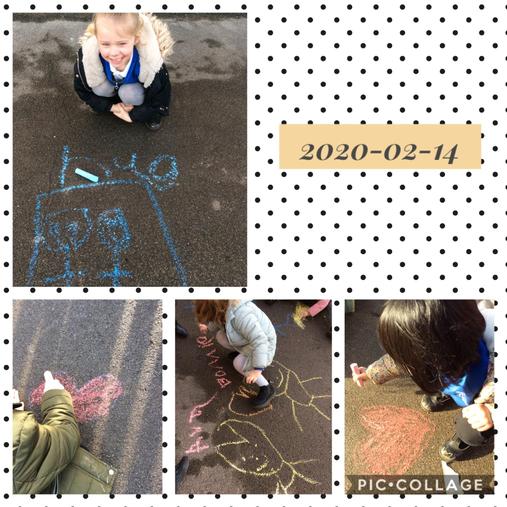 This week in Foundation the children have really enjoyed looking at the curiosity cube in the wonder area and what is inside it! Inside there were parts from a sky box that you may have at home. The children were really interested in what they could see and questioning what it may be. They had some fantastic predictions such as: "It's a game', 'It was part of a tv but now it is broke because it doesn't have any batteries!'. This week in Foundation the children had an exciting visitor come and see them. As our project is all about People who help us, we had visitors from RNLI. They discovered the role of a life guard and life boats, and what they do to help people. This helped us to clarify the concept of 'role'. This week in Foundation the children have been super busy! They have been learning lots more new Phase 3 digraphs in their phonics, such as: ng, ai. and ee. They have been trying really hard to put these digraphs into their learning and in particular their writing.

In forest Fridays this week, F2 have been exploring patterns using natural objects in the outdoor area. How do we make a pattern? Can we describe our pattern? What did you use for your pattern?

This week in Foundation. F2 began to learn a different skill in their PE lesson. They began to look at throwing and catching, They practiced their skill through various activities, as well as incorporating teamwork skills. This week in Foundation the children began their project on 'Are we obligated to help others?'. The children had a focus text of 'The Jolly Postman'. We had lots of discussion all about who post men and ladies are, how they help us, what is their 'role' - 'role' is the new Geography concept we have introduced. As part of the independent group focus, F2 had to look at the map from the Jolly Postman and retell the story, thinking about which character went where, what did they do, who was their letter for, etc. This week in Foundation the children had something very exciting happen! They had a Polar Express day! They came to school in pyjamas, dressing gowns, onesies and or slippers...they had a special golden ticket which was whole punched as they came into their classroom and then they 'boarded' the train on the Polar Express. Throughout the day the children did different Polar Express activities, watched the film itself and even had Hot Chocolate and party food! What a brilliant, memorable day...for the children and teachers!

This week in Foundation has been a super exciting start to the christmas month of December. F2 were very lucky in going on a school trip to the Pantomime with the whole school to watch 'Cinderella''. F2 loved it from start to finish, exploring what they could see on the coach, laughing during the Pantomime as well as being super amazed by all of the pretty lights and noises, and then being so tired that they slept on the coach on the way back! The following few days saw the children writing and drawing about their favourite parts from the Pantomime. Fantastic experience!

This week in Foundation...the children looked at an alternative fairy tale to Little Red Riding Hood...they looked at 'Little Red Reading Hood'. The story was a magical adventure through different fairy tales, read by Little Red. Through English lessons F2 compared both the original and the alternative story and discussed what was the same, what was different and what was similar. As well as comparing F2 looked at the language in the story and in particular the rhyming aspect of the vocabulary used. The children had a go at some rhyming activities. .

This week in Foundation, we have been innovating the story of 'The three little wolves and the big bad pig'. F2 had so many amazing ideas about who and how they could innovate the story. In the end they innovated the story to 'The three little wolves and the big bad tiger'. They also changed the house made out of cement to the house made out of stone, and instead of a digger being used to break down the house it was a sword instead. F2 have really took this into their own learning time. They have been acting out the story, drawing characters from the story, and retelling the story.

On Thursday this week it was 'Science day'. At first, we had a class discussion about what Science actually is and the children had some great suggestions, e.g. "It is all about the world", "It is putting things together and them exploding", "You can put a mentos sweet into a bottle of coke and it explodes!", "It is mixing colours together and seeing what colour it makes!". 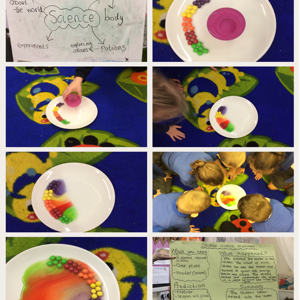 This week in Foundation, we have begun our learning of alternative traditional tales. F2 have been introduced to the story 'The three little wolves and the big bad pig'. They have created and learnt a story map, they have retold the story, they have completed a venn diagram comparing the alternative to the original and they have even done some Reciprocal reading using the blurb of the story before finding out what it was! This week through their Literacy, F2 have been learning all about Remembrance day and the meaning behind poppies. They have learned a poem called, 'Poppy Poppy', added actions and performed it.

In Forest Schools this week F2 continued with their learning about poppies and created their own poppy using natural objects in the outdoor area. They used stones, leaves. sticks and red cherries which some of the children identified themselves and said: "We can use the cherries for the outside part of the poppy because they are red and so is a poppy!".

In Maths F2 have been learning all about the number 4. How can we identify four of something? Can we show that we have four items? Can we draw four smiley faces? Can we add the number and the amount? Can we form the number four? The children have immersed themself with this number in their environment, for example one child in F2 saw that on the cooker in the home corner there are four hobs to cook on, one child in F2 noticed the number four on the 100 square in the maths area. 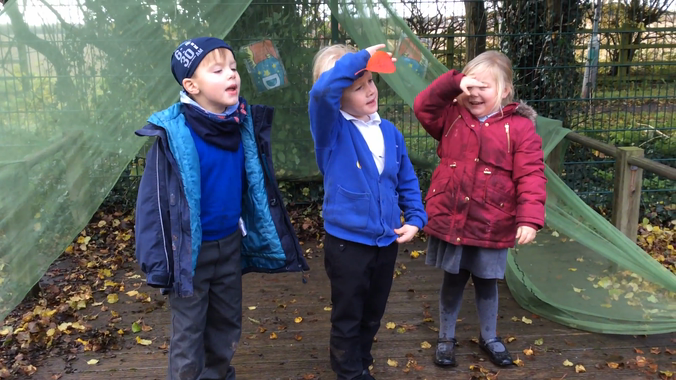 WOW! F2 have blown everybody's socks away this week with their learning!

In Phonics this week we have learnt the phonemes: 'g, o, c, k', have practised writing them and reading them in words such as, 'dog, cat, kip'. We have also had challenging activities such as reading different words and deciding are they real words? or are they not real words? and sorting them out correctly.

In Maths this week we have delved right into the number 1! What does it look like? How do we write number 1? How do we show we have 1 of something? What can one of something look like? Where can we find a number 1 in our home/school environment? F2 took their maths learning into their choosing time, especially into their outdoor learning! They were writing the number 1 and even showing number 1 through the use of drawing five frames with chalk on the ground!

This week F2 have been super busy with their learning! They have been on an adventure into Year 1 to learn how to make jam sandwiches. Each child in Year 1 partnered up with a child in F2 and they guided them step by step on how to make the jam sandwich. When they had finished, they were able to eat their jam sandwich...they definitely enjoyed that!

One afternoon as part of a whole school focus on Modern Foreign Languages, F2 learned all about a different European country - Germany. We looked at the German flag and compared it to the United Kingdom flag and described the differences, we discovered how we could get to Germany if we wanted to visit and we even learned how to say good morning in German with help from one of our class friends who is part German. F2 continued to take this into their own learning and were making German  flags, having a go at writing labels such as, 'Germany' and 'flag' and were also greeting each other with 'Guttentag'.

To end a great week F2 made some cakes to help sell and raise money for Macmillan coffee morning. It was a great way to end the week seeing F2 so enthusiastic to help a great cause!

This week Miss Mann bought her snails into school! They lived in our 'Wonder' area. F2 loved looking at them using magnifying glasses, and making predictions about what they would feel like just from looking at them. They then were super eager to get them out, which they did and they fed them different fruit/vegetables, gave them water and even held them. There were some brilliant language being used to describe what they felt like, e.g. "Slimey, slippery. freezing cold..".

This week the children have been taking responsibility for their learning, both in the inside and the outside areas. We have been thinking about how we can problem solve and think purposefully about the things we are choosing.

In the outside area the children have loved paddling in the water and using their senses to describe what is happening. How does it feel? The children then decided to put mud into the water to see what effect the mud made to the water. F2 then decided that if they got sticks- of all sizes, and out one end in the mud, it could then be used as a writing tool. The children were then writing their names, different phonemes, and other words.